I mentioned in a previous post that I became friends with two Greek women named Lydia and Stella. I did return a third time to paint the ruin stairs near to their home and I also wanted to say goodbye to my new friends.

I set up my paints, sat down and began. The street was very quiet and I thought they may be resting but about 10 minutes later Stella came out and offered me a cold drink. When she returned she also carried a small wrapped gift. How thoughtful! I am now the proud owner of a mug with the map of Chios and a tasty treat made from the Mastica tree which only grows there on the island. She then asked if I wanted to see Lydia. Yes!

She went to her home across the narrow street and out Lydia came with a big smile.

As soon as she saw me she motioned for me to come into her home so I left my paints and followed her in.

Her house was small and very clean. She seated me at the table and went into her kitchen to get refreshments. 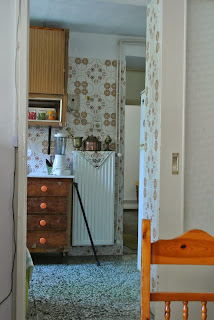 As she was busy there I looked around the room. 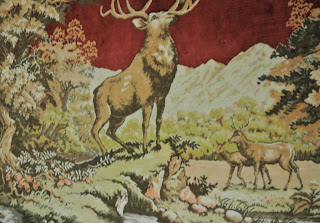 On the wall above the sofa hung a huge tapestry of an elk and countryside. The dining chairs had embroidered tapestry seats which were covered in plastic....and then I saw it. On top of a beautiful wooden cabinet she had 3 framed pictures. One of her when she was young, one of her mother and also of a young couple who I think were Stella's children. In front of that picture was the one of us together. How nice! 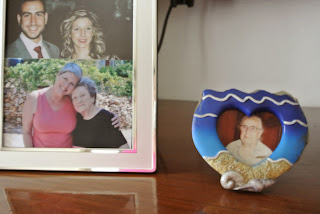 When she returned she sat down and I said to her how nice it was that she had the photo of the two of us on the mantle. She smiled and put her hand to her heart. She was so kind. I then asked about the other photos and she pointed to the small one of her mama and the other was of her in her younger days. Beautiful!

She then quickly got up and went into the other room soon returning with a stack of fabric.

One by one she unfolded each piece. The first three were two small squares with a matching table runner cross stitched with burgundy and rose coloured flowers. Beautiful! The next a large white square of intricately crocheted thread. Such detail! I know the hours that went into making these as I remember watching my grandmother when I was a child. 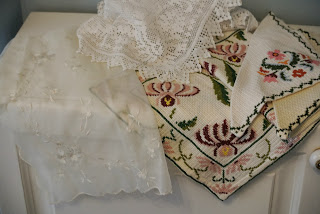 The last piece was a delicate fabric so shear I could see right through it. Around the edge and throughout the centre were small embroidered cream coloured flowers. It was stunning. She told me her mama made it when she was a young woman. Knowing Lydia is now 93 meant this was over 100 years old. Incredible!

She then carefully folded and placed each one into a paper bag, sealed the top with tape and gave it all to me. I was stunned! Oh, no I said. These were her family treasures! I thanked her placing my hand on my heart but she insisted. Pulling the parcel to her chest looking directly at me she shook her head no, then placed it in front of me she nodded sternly. It was clear that I was now the proud keeper of her family heirlooms.

We both shed a few tears as we hugged. I knew we connected but to have her give me such treasures...I was speechless.

She then called for Stella to return so we could have a visit together but way too soon it was time to say good bye. I took this picture just before I left. 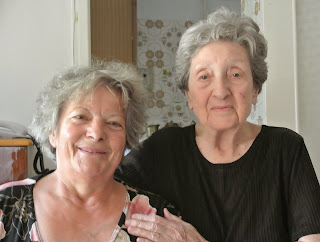 During this entire conversation the only English word spoken was mama. Stella and Lydia knew no English and I nothing in Greek. It's amazing to me how we can make ourselves known.

Walking back to the hotel I was thinking, what if I hadn't returned? They were both ready to see me again to give me such special gifts.

It was meant to be.

This is what life is all about. Not only to be open to the moment, but to search for it. Your life will be enriched beyond anything you could imagine. I will always hold memories of Stella and Lydia close to my heart.
Posted by Connie Cuthbertson at 4:13 PM