Lindos, my new home in Greekland~

After over a week in Rhodes Town I decided it was time to scout for a new place to paint so I took a bus tour to the small village of Lindos about 50 kilometers away. 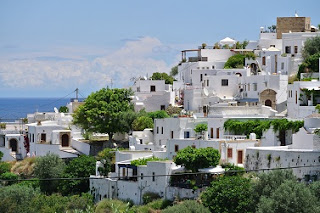 The light here is incredible!! 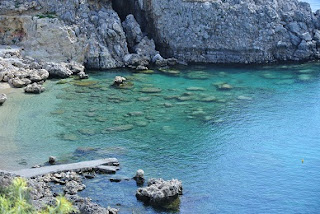 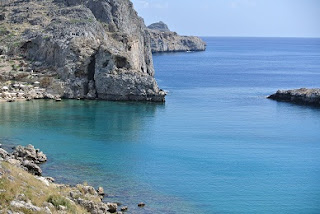 It's an absolutely beautiful area and I knew immediately I wanted to move here for a while.


But where to stay? I wanted to be right in the village and the only hotel there was fully booked. (and way out of my price range!) Before heading back up to the bus area I stopped to buy a bottle of water. I asked the man behind the counter where I could stay here in Lindos. He said just one minute, poked his head out the door and  yelled to Stelios across the lane. Of course his name was Stelios! The perfect name for a Greek man who lives in a traditional Greek village!

Now I know what you're thinking....why would I just follow this man to his home...a stranger in a strange land. I normally would never do this but I could sense that Stelios would be o.k. He was working at the photo booth for the donkey rides. He seemed fine and there comes a time when you have to believe and trust in others so off we went.

He was very professional and told me he had an apartment to rent and assured me I would be very happy here. As we started walking I told him I needed 3 things...wifi, my own private shower and air conditioning. Yes, yes, yes he assured me as we continued to climb up and around beautiful whitewashed narrow streets. On the way there he showed me where to shop for my groceries and where to buy the best traditional Greek meals all the while saying "Hi" to his many friends along the way. I could see Lindos is more of a family than a village..

Finally we arrived at his house....actually it is a very nice door. With all of these narrow winding streets...how would I ever find this place again??!!

As we walked into a small courtyard he explained he and his wife live downstairs and I would live up. Everything was freshly painted white and was dazzling in the late afternoon sun. The terrace was huge and had a great view across the tops of homes up the hillside to the acropolis. Heaven! 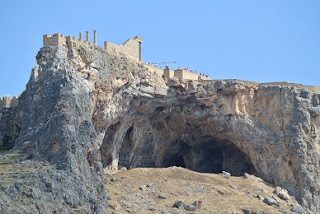 Now for the room. Let me say it is very basic but clean. 2 small narrow beds but they are long so that works! He told me for the first while I would sleep in one bed...then just move over to the next as they don't do daily linen changes! Kind of like camping..fun! I looked up on the wall, air conditioner, check! Wifi, check! (actually turns out the wifi isn't the greatest with only 1 or 2 bars for connection but doable) Now for the bathroom. I went in and saw a toilet and sink but when I asked him where the shower was he said in the bathroom. I went in again and looked behind the door...nope just a wall. Puzzled I asked again about the shower. It was then I knew I was now in a traditional Greek home. There was a hose coming from the wall just beside the toilet with a drain in the floor!! He informed me they would give me an extra towel to mop up the water! This made me hesitate for a bit but then I decided to go for it! I've never been in a bathroom before where the entire room was also the shower!

He and his wife are a lovely couple and have been wonderful. I feel at home here. 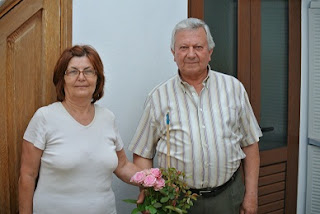 And the rest, as they say is history...
Posted by Connie Cuthbertson at 11:24 PM