After painting and writing my way around Santa Margherita for several days,  I asked many other travelers and towns people where they thought the most picturesque area would be for me to go
and paint. Many recommended I take the train to Monterosso, a small fishing village not too far away.
And so my adventure begins.
They were right in saying how lovely this place was. It is an old medieval town with narrow streets and stone walls tucked into a small sandy cove. 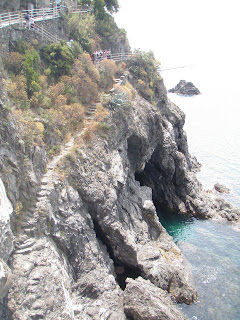 I could find many things to paint and was sitting in the town square deciding what my subject would be when I noticed on the far side of the town there was a path with many people walking in both directions. I thought I'd better check it out to see what was so interesting. Knowing I was in for a bit of a hike I donned my hat, sunscreen, made sure I had a full bottle of water and set off. 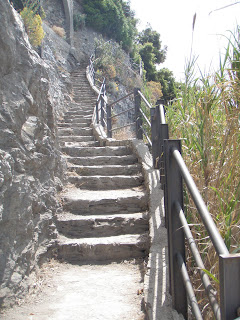 It wasn't long when I realized I was in for a bit of a challenge as the wide flat path now turned into narrow stone stairs. I asked a young couple walking towards me where this leads to and they said the small town of Vernazza was the destination and it was about 1 1/2 hour hike. The day was still young and I felt the exercise would do me some good - especially after all of the pizza and pasta I have consumed! 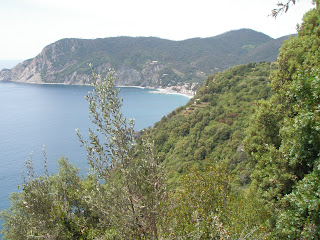 Half an hour passed like molasses as I made my way around and over a mountain. I took a small break to take a picture of the village I just left. It seemed so far away now and could barely see the  small sandy cove from where my latest adventure began.  It was then I was thinking to myself that I could still turn around and go back to Monterosso but somehow that would mean defeat. I was not a quitter....yet nor was I an Olympian. The views were spectacular.....I forged ahead.                      ~To be continued~
Posted by Connie Cuthbertson at 7:56 AM