Exploring The Hills On Crete ~ Part 1

While staying at a B & B in the small village of Xerocampos, I mentioned to the owners that I loved to explore old ruins and small hilltop villages to gather ideas for my paintings. They recommended a few for me so I packed my car and headed up into the hills.

A narrow dusty road brought me to my first village. It was very small and almost abandoned. As I pulled the car to the edge of the single lane road I noticed an elderly man watching me from behind a vine-covered gate. He obviously wasn’t accustomed to seeing many tourists here and I wanted to let him know what I was doing. 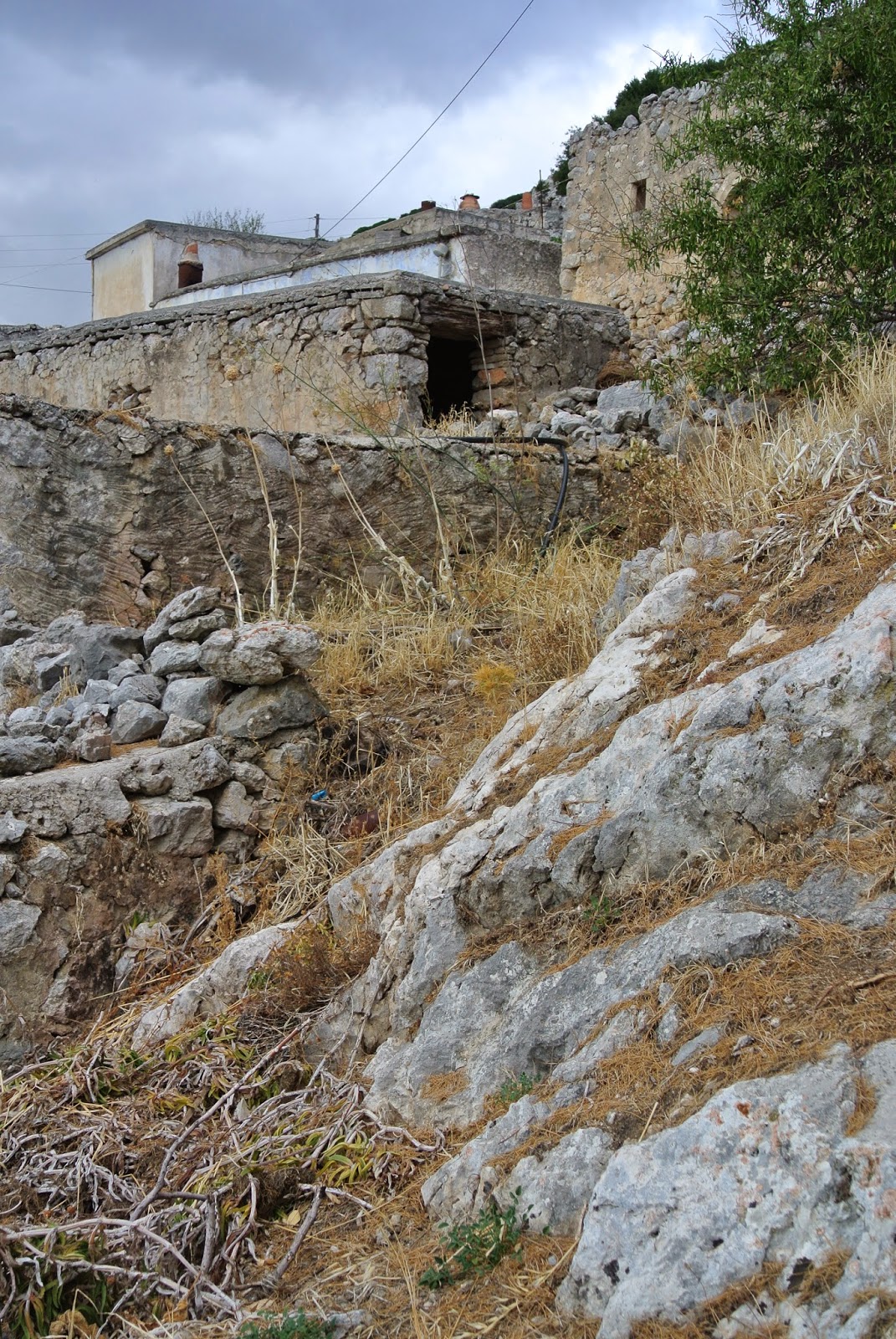 My knowledge of the Greek language is next to nil so I showed him my sketchbook and paints to help explain my intent. He nodded and waved his approval so off I went up, up, up, the narrow alleyways. Around the first corner a big dog came at me growling and barking wildly. Thank goodness he was tied up! I considered leaving right then but I thought I’d try to make it to the old church up on the top of this hill. 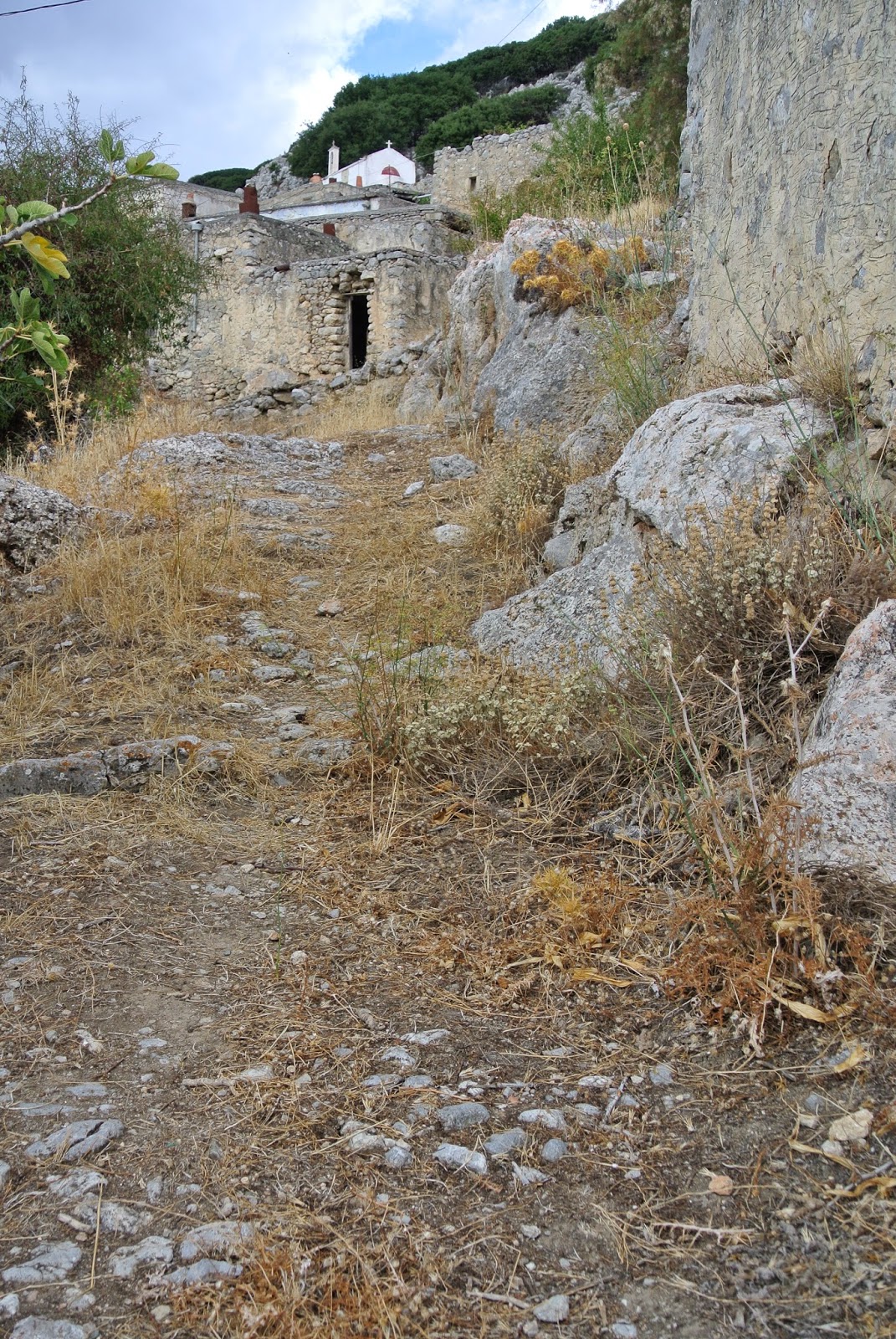 About 15 minutes into my hike I heard several gunshots but since I was almost to the church I decided to push on. Surely the villagers weren’t trying to scare me off!! Still, I did have an eerie feeling as I continued on. 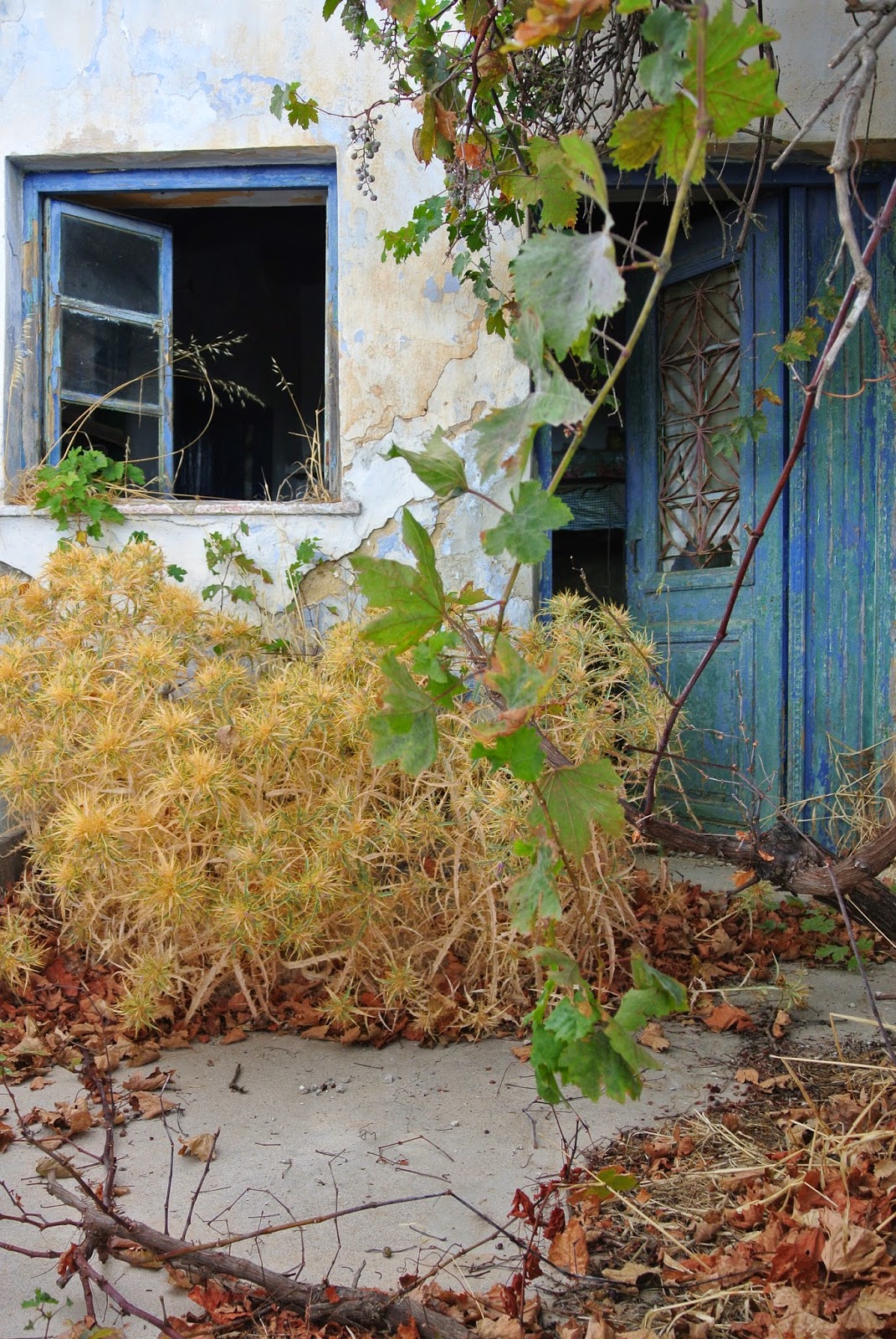 One particular house had something extra special about it. The light filtered through overhead vines that covered a small terrace creating a magical atmosphere. A beautiful old wooden door with peeling layers of blue paint told me it had been abandoned for some time.Though it's now in ruins, I feel it is still a very special place. The open door was my unspoken invitation to explore further.

As my eyes adjusted to the dim interior light, the first thing I noticed was a plate rack on the wall. Broken ceramic pieces littered the floor and on a woven chair seat I noticed a dust covered woman's leather shoe. 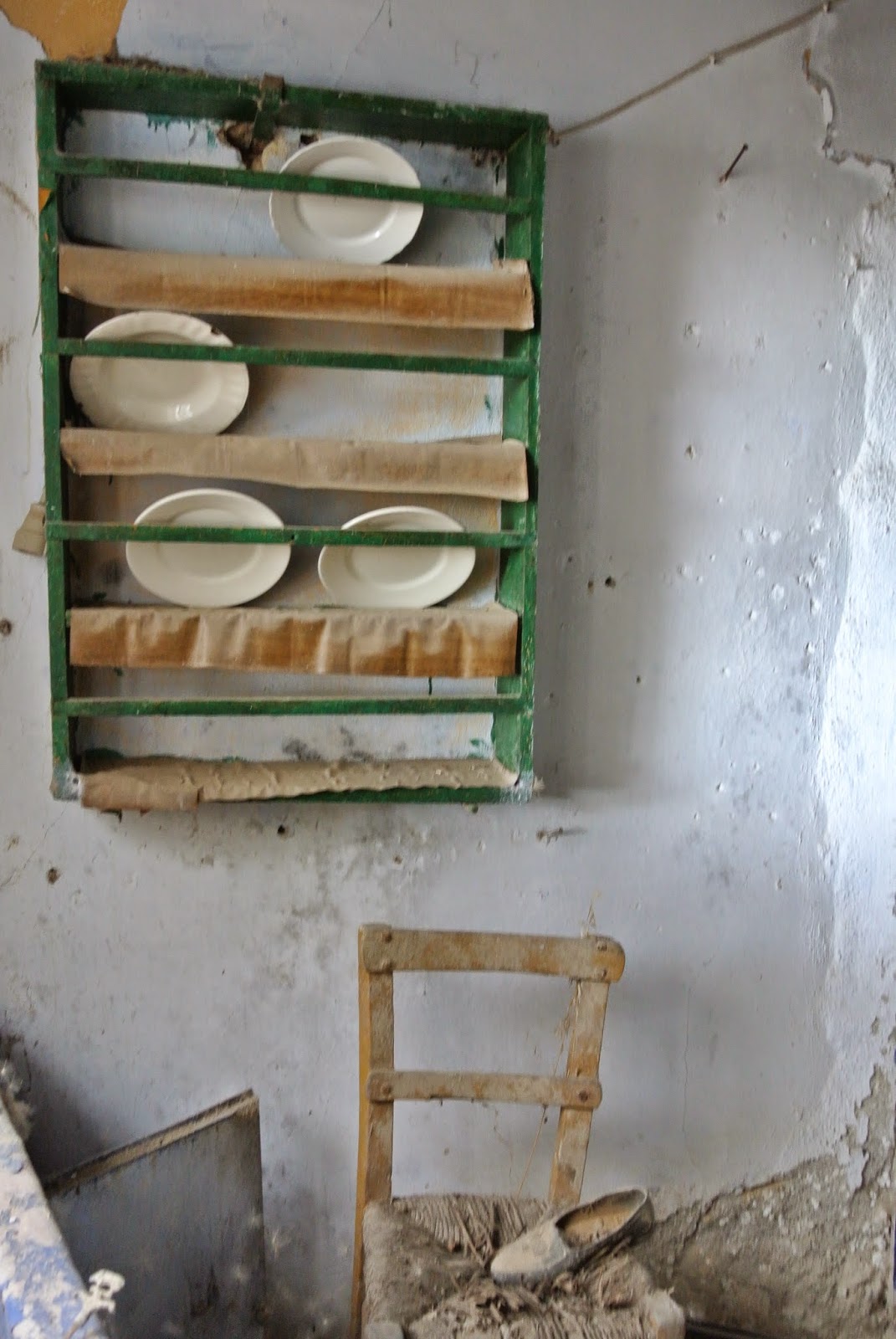 It was a small open space and from what I could tell it had been vacant for several years. Some old torn bits of fabric littered the mantle and a few old rusty olive oil cans lay in the corner. I could see this space had been well cared for at one time but is now a forgotten jewel. 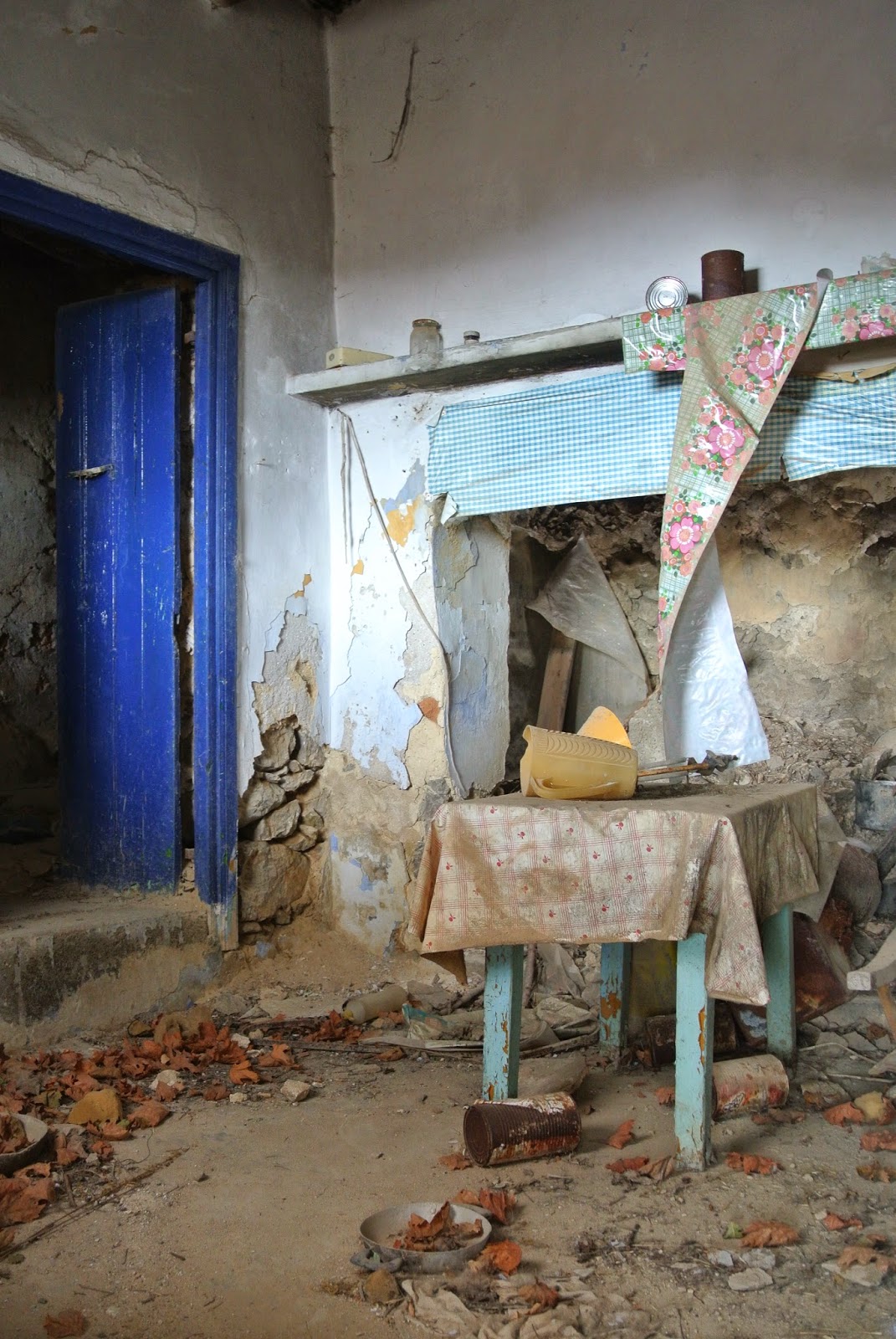 What happened to the old woman? Where was her family? Was hers a hard life or one full of joy? I would like to have met her. 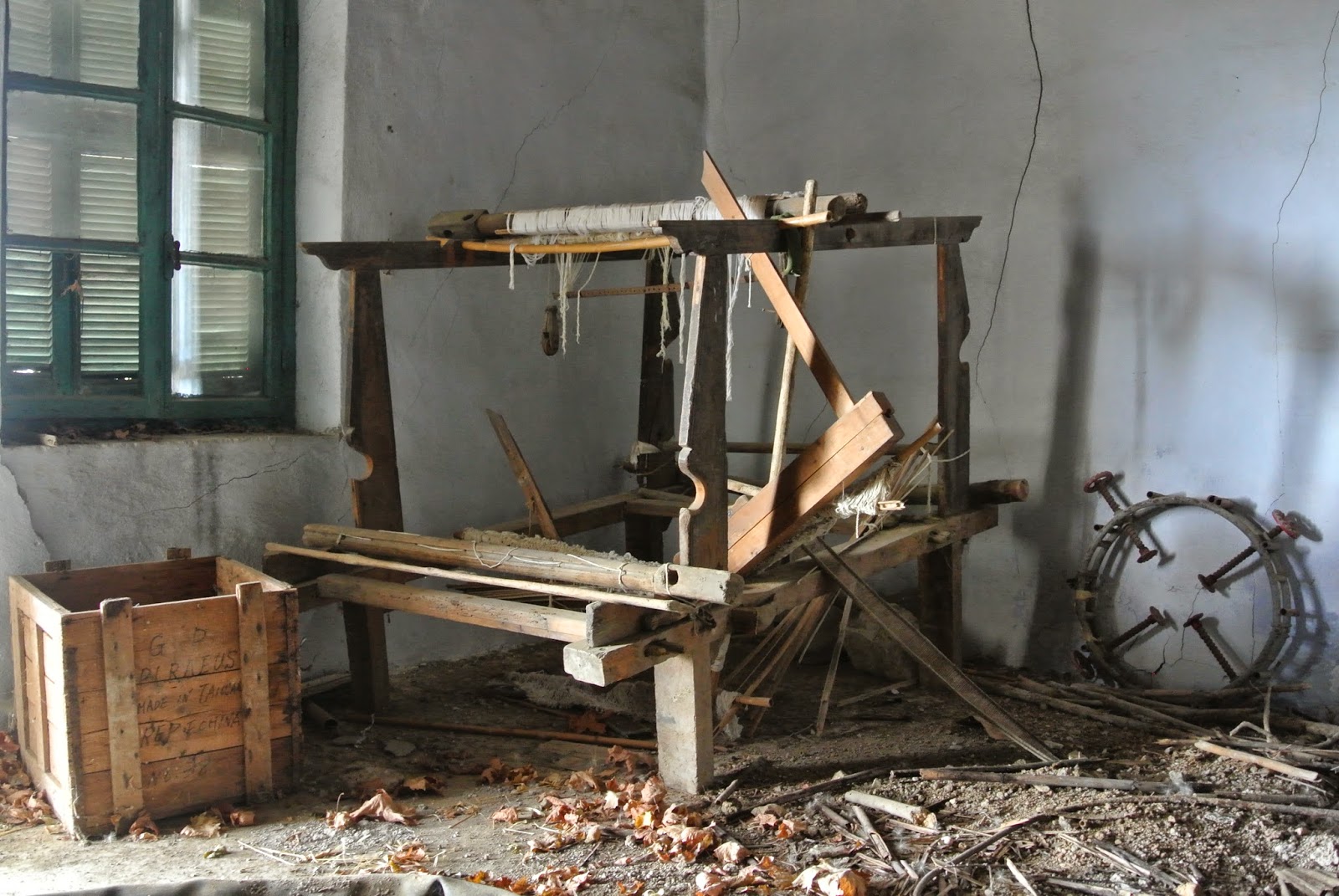 In another home close by I came across this abandoned loom. I imagined the beautiful textiles created here after countless hours sliding the shuttle back and forth. I was walking in a living museum and felt I have become a part of her history. The stories in my mind now have a place in what happened here so many years ago.

Another gunshot went off.  I was beginning to feel like I was in a movie and I was the crazy woman who wouldn't make the right choice and leave. Ok, now you know that I have a wild imagination! The sign of a true artist I'm told! 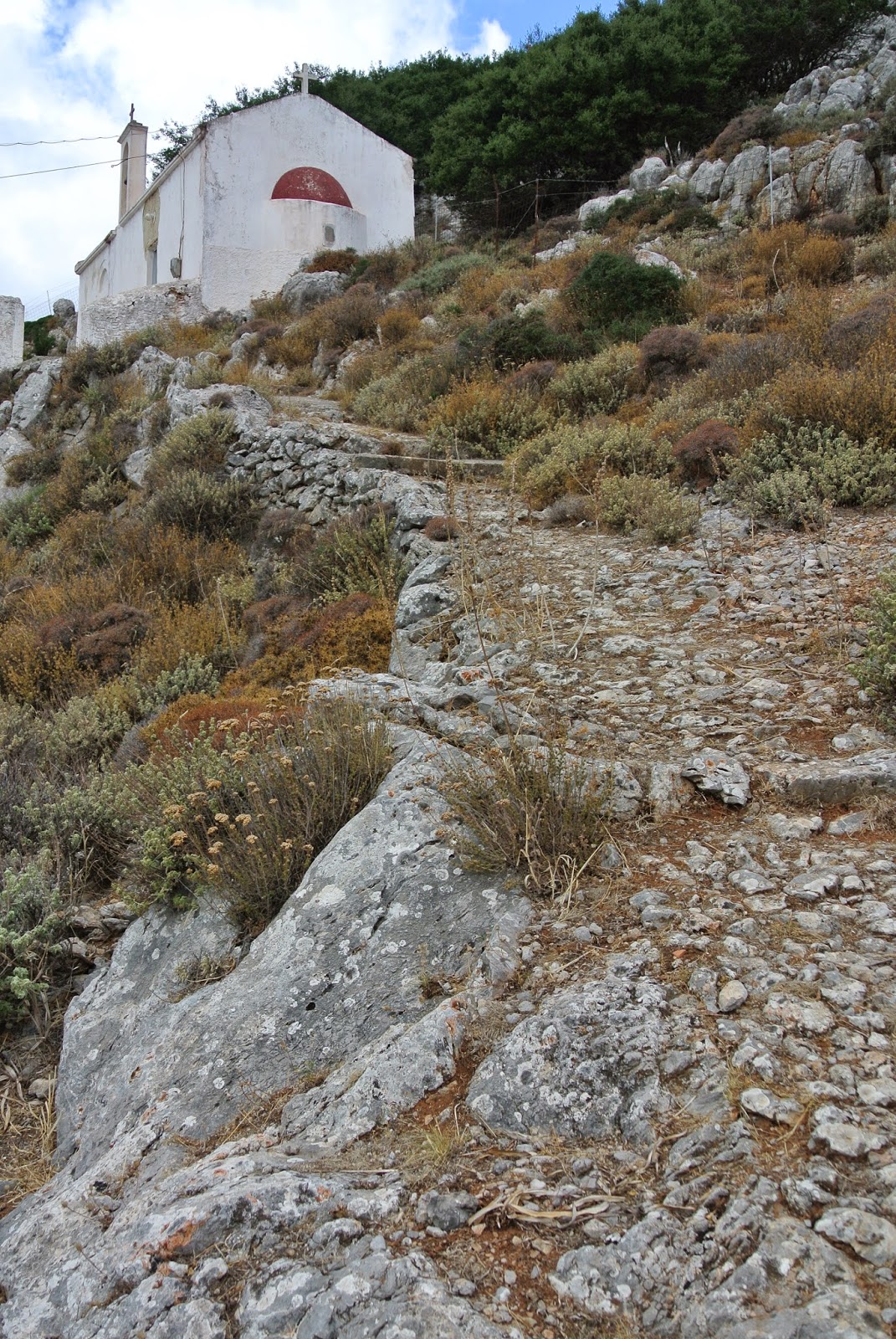 I finally made it to the small church. I went inside and found many beautifully painted wooden panels that are still in remarkably good condition. I can see this place has been well cared for. 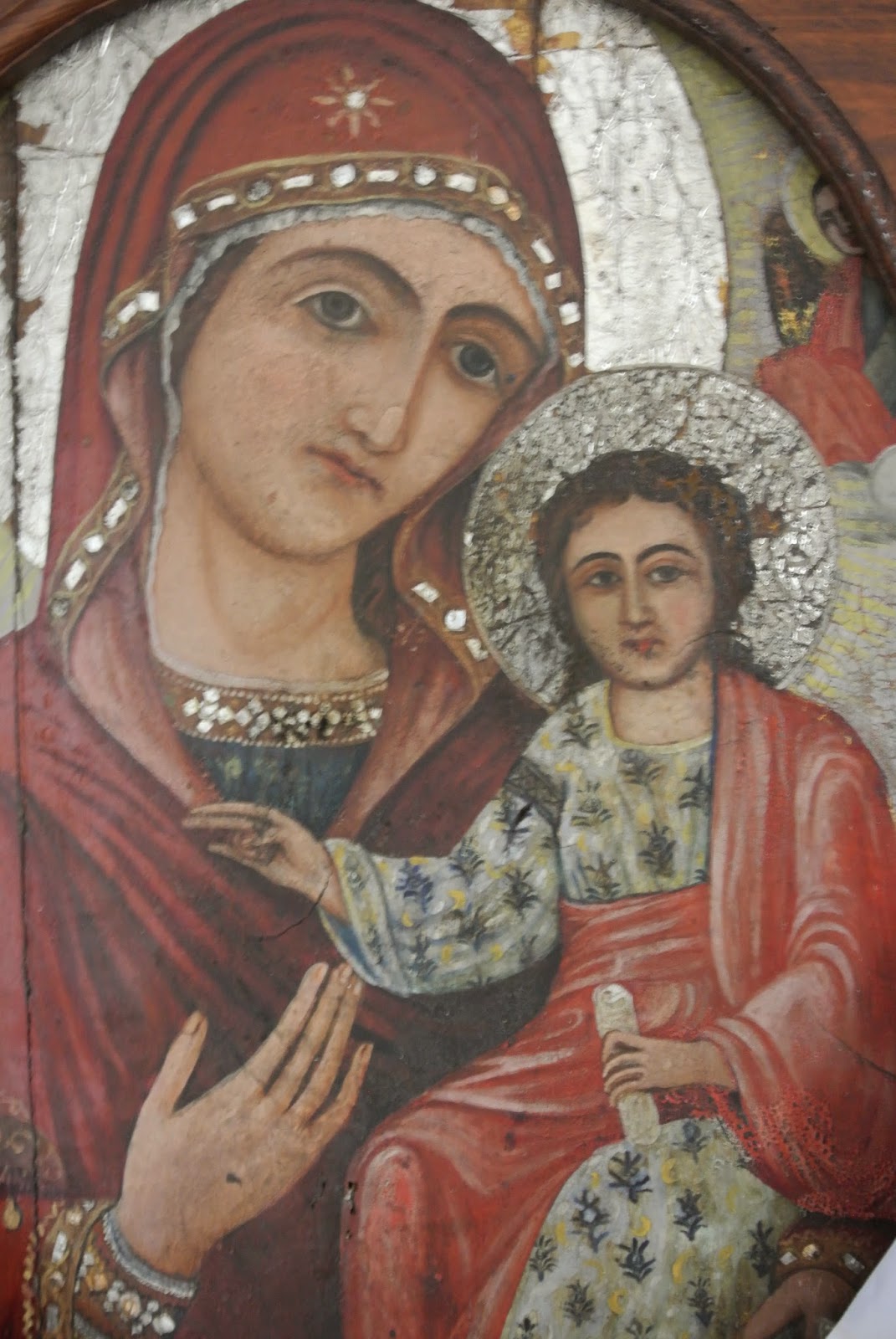 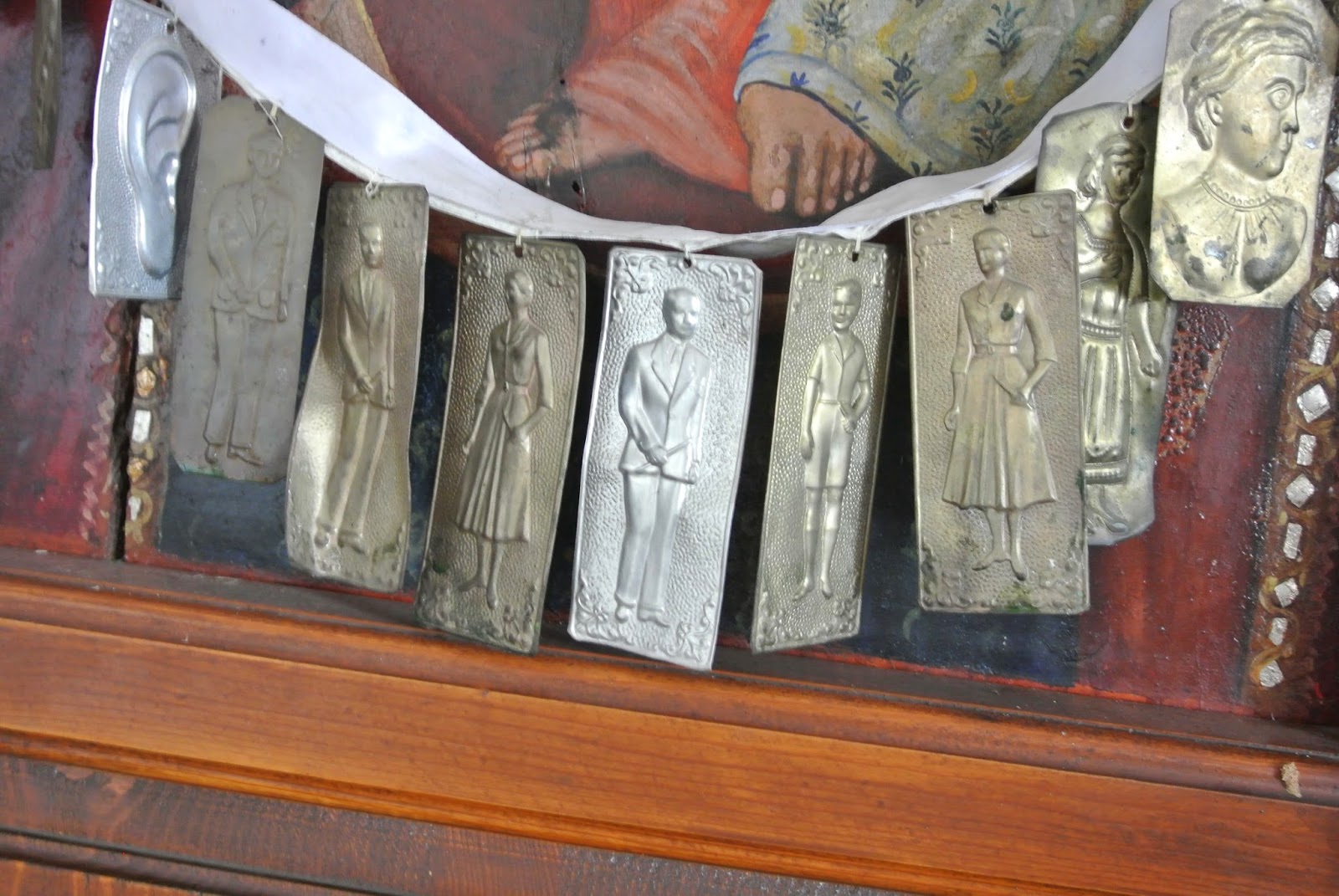 Silver Icons were draped across the main panel. These silver pieces are used for prayer requests and the different symbols represent what it was the person was praying for. I love learning about different cultures and traditions. 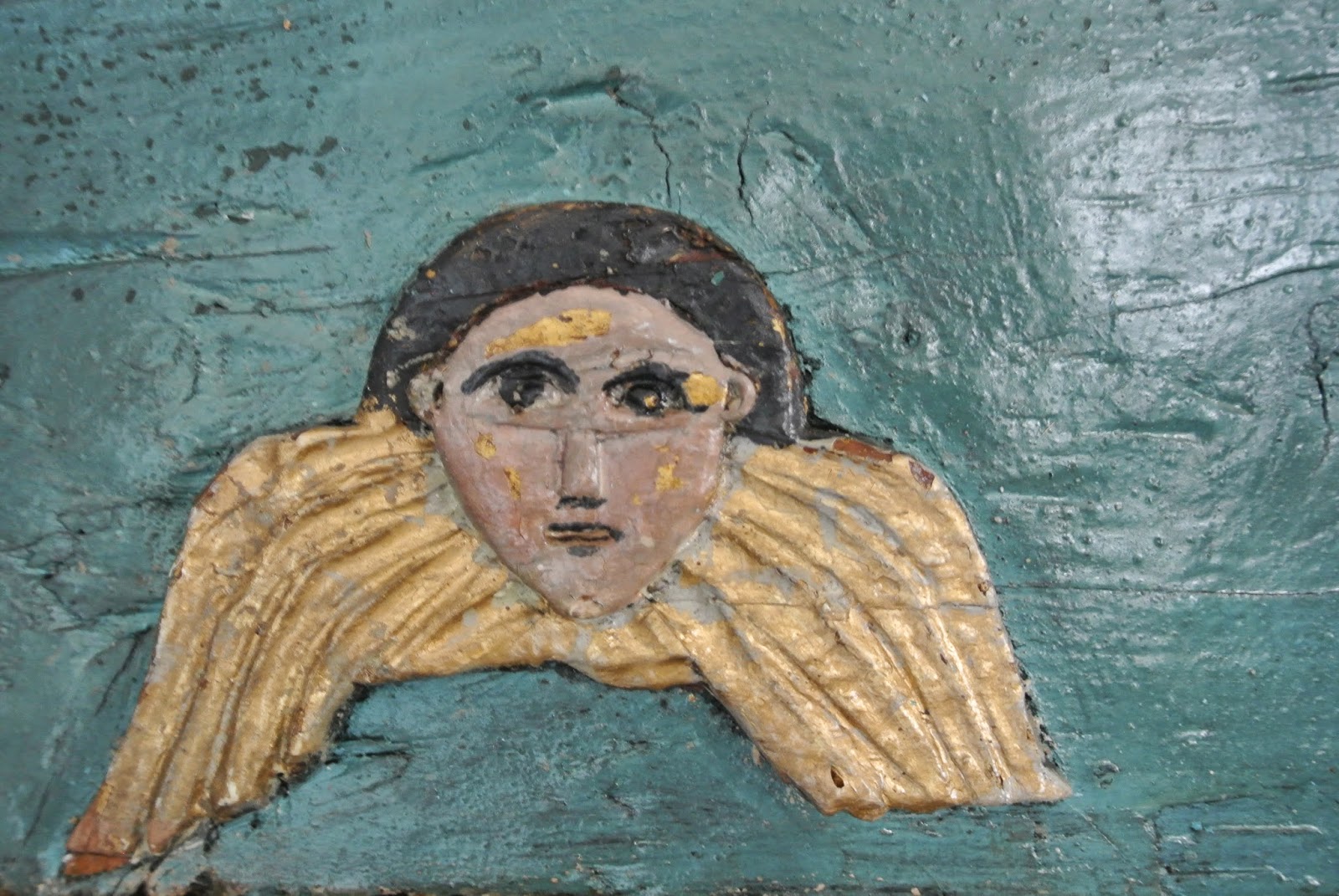 This hand carved angel was painted on a thick wooden plank.

Another gunshot went off and I decided it was time to head back down the hill. Of course I took many more pictures along the way! 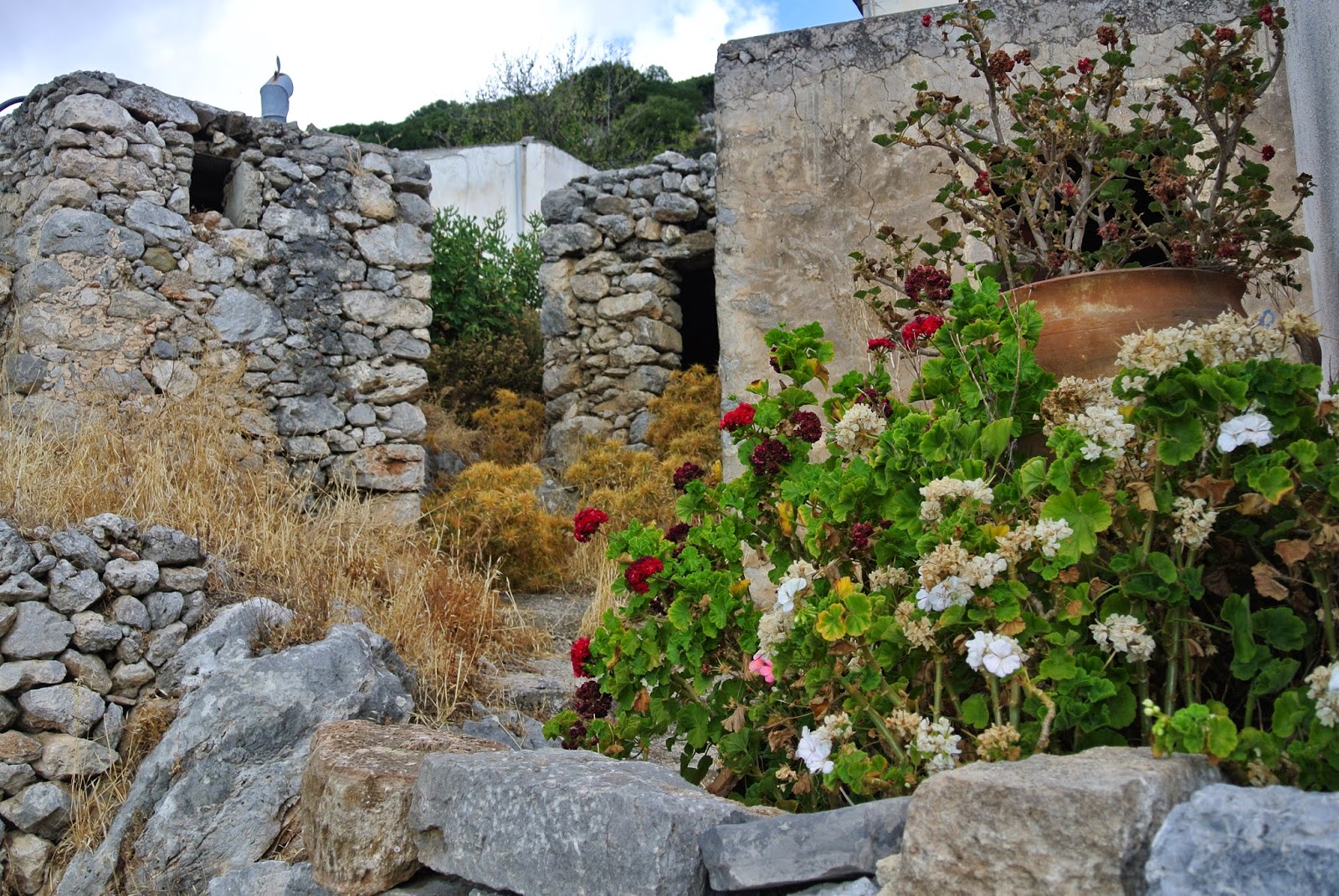 The dog and the old man were there to "greet me" again. I smiled and waved as I pulled away relieved to be leaving the sound of gunshot behind but also very glad I stopped to explore this small village.

I'll share more about my next hilltop adventure and reveal the answers to the gunshot mystery in my next post.

Posted by Connie Cuthbertson at 5:30 PM