After leaving Rethymno I decided to rent a car to drive to the south east side of Crete. I must admit I was a little apprehensive but the thought of spending countless hours on a bus that would stop for every person on the side of the road for miles convinced me this would be best. I also wanted the freedom to explore some hilltop villages and knew I would require a car for this.

I was told by a friend that this part of Crete was quiet and not very touristy. A perfect combination for my painting and writing!

First let me say that when in Greece you must request a car with an automatic transmission....not in North America. That was my first mistake. Then there was some confusion as to when the car would be returned. All I can say is I'm sure the rental agency was glad to see me go! I claim chemo brain for an excuse! It really comes down to doing your homework before travelling. Something I plan to do more of in future travels!

And so my next adventure begins... 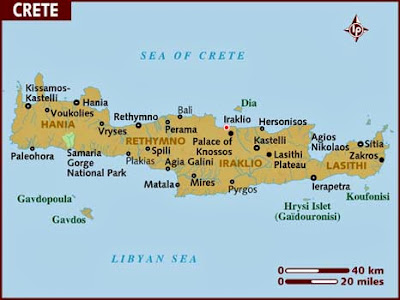 I drove from Rethymno to Xerokampos, which is not on the map above but is close to Zakros on the right side of this map.

Overall the roads were in good shape and I enjoyed the drive through the central mountains. I had to ask directions a couple of times but found my way fairly easily. The challenging part with the road signs was on my map the towns were spelled one way, and many of the signs were spelled in old Greek so the words didn't match up. For instance, Lerapetra and Ιεράπετρα- Agios Nikolaos and Αγιος Νικόλαος - Sitia and Σητεία meant the same thing! 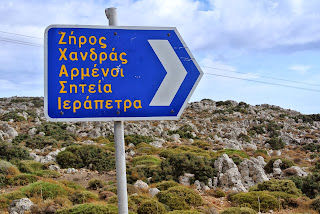 It did make things kind of tricky at times but I am good with a map and not afraid to ask for directions.

Even though the cars drove on the right hand side of the road, there was one very big difference. The roads are very narrow compared to Canadian standards and at some areas, for instance, around hairpin turns on mountaintops, they are only one lane wide which makes for some extra unwanted excitement! Thankfully on these really bad corners they have installed mirrors so you can see if anyone is approaching. Also, there aren't many guardrails. 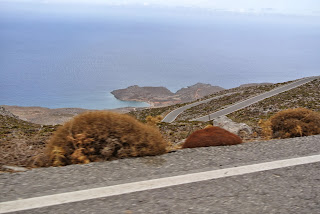 Another big difference is the fact that even though they are only 2 lanes wide, the centre line turns into a passing lane no matter if there is oncoming traffic or not. So to be safe always drive to the far right of the road with one tire close to the outer edge of the pavement. At first I found myself holding my tummy in when cars would pass by...(not that this would do any good whatsoever!!) but I soon settled into the Cretan driving rhythm and found myself enjoying the ride. 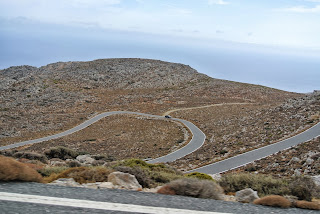 Look carefully and you can see a car on the narrow highway above. 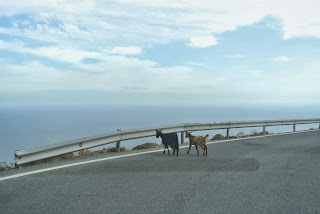 Then there are the highway decorations, namely goats. Granted they aren't the size of moose but on such narrow roads they get the right of way...they know who's boss!


Slowly, slowly is the only way to go. The goats have it all figured out...


Posted by Connie Cuthbertson at 8:44 AM